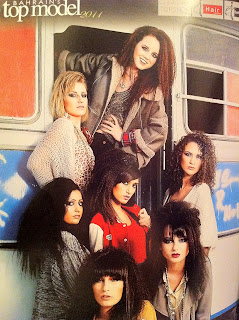 I worked on a shoot for Bahrains Next Top Model some time ago, which is out now in this months FACT Magazine.
It was a lot of fun, even though we did get a bit down and dirty (oo-er!).
As most of you correctly imagine, Bahrain is very sandy. When you add a bit of heat to that and a little bit of wind, you have really interesting photoshoot conditions. Now on top of this, add a junkyard in the middle of nowhere with a couple of bombed-out buses and you can imagine the scenario! 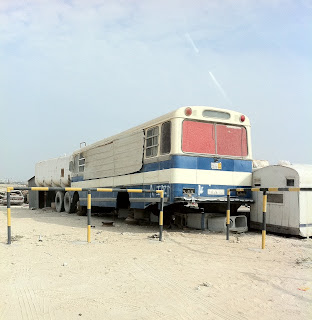 Due to an almost-sandstorm, bombed out bus no.1 became the hair and makeup bus, and the other was used for the actual shoot. Everyone fought the sand viciously all day, I was constantly wiping down my kit and re-sanitizing everything (the bus had no windows naturally, I also had to kick the door in to get inside, oh the GLAMOUR!).
By the end of the day I had admitted defeat and came home with about a kilo of sand in my shoes/kit/mouth.
The theme of the shoot was grungey glam; with crimped hair and smudgey but clean makeup. The gorgeous clothes and accessories were provided by Topshop. At any one time, there was at least 16 people running around outside the bus, in the sand, shoes in one hand, fanning away the dust with the other. The joke of the day was “where is the toilet”? as of course there wasn’t one. We were in the middle of the desert!

A series of shots were taken, group and individuals, with much larking around in between. Have a look behind the scenes here.As there were so many models and different looks, I have decided to give a quick bit of background on one of the makeup looks for now, which is Anna’s below 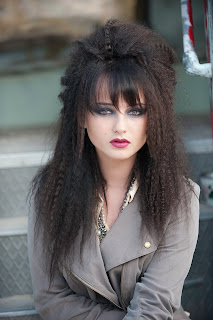 Her skin was prepped using a little Oil-Free Primer by Laura Mercier across the t-zone.
I then applied a thin layer of MAC Studio Sculpt foundation, as she has beautiful skin.To bring out her stunning eyes, 3 products were used; Chanel Le Crayon Kohl in Noir was smudged into the top and bottom lash line, followed by Frosted Ocean eyeshadow by NYX all over the eyelid, socket and pulled out slightly at the edges.Max Factor False Lash Effect Mascara was applied liberally followed by a light dusting of Mineralize Skin Finish in Light.MAC blush in Format was blended below the cheekbones and the look was finished off with blotted out MAC Rebel Lipstick.Check out the rest of the pictures from the shoot here. For the full editorial grab a copy of this months FACT Magazine.

This is my podcast corner. I try and sit here at l

Do you have Covid Fatigue? It’s a thing, apparen

It’s the smell that gets you. The smell of empti

I own three @topshop Weekend T-Shirts and can’t

Festive makeup on the most un-festive day, but we

A dreamy breakfast at @parkers Beach House with @t

(Closed) All I want for Christmas is... @patcholog